Skip to content
Pawel Lotkowski, of Norwich, center, talks to Ingrid Kramp, left, of Shoreline Film Group in Waterford, about his business idea for EuroDetailing, a professional car detailing business, while his girlfriend, Nicole McDermott, of Norwich, looks on during the “ Demo Day” event hosted by the Chamber of Commerce of Eastern Connecticut at the Thames Club in New London. People developing ideas for a business participated in a free 10-week Entrepreneur Academy held by the chamber over the summer. (Dana Jensen/The Day) Buy Photo Reprints 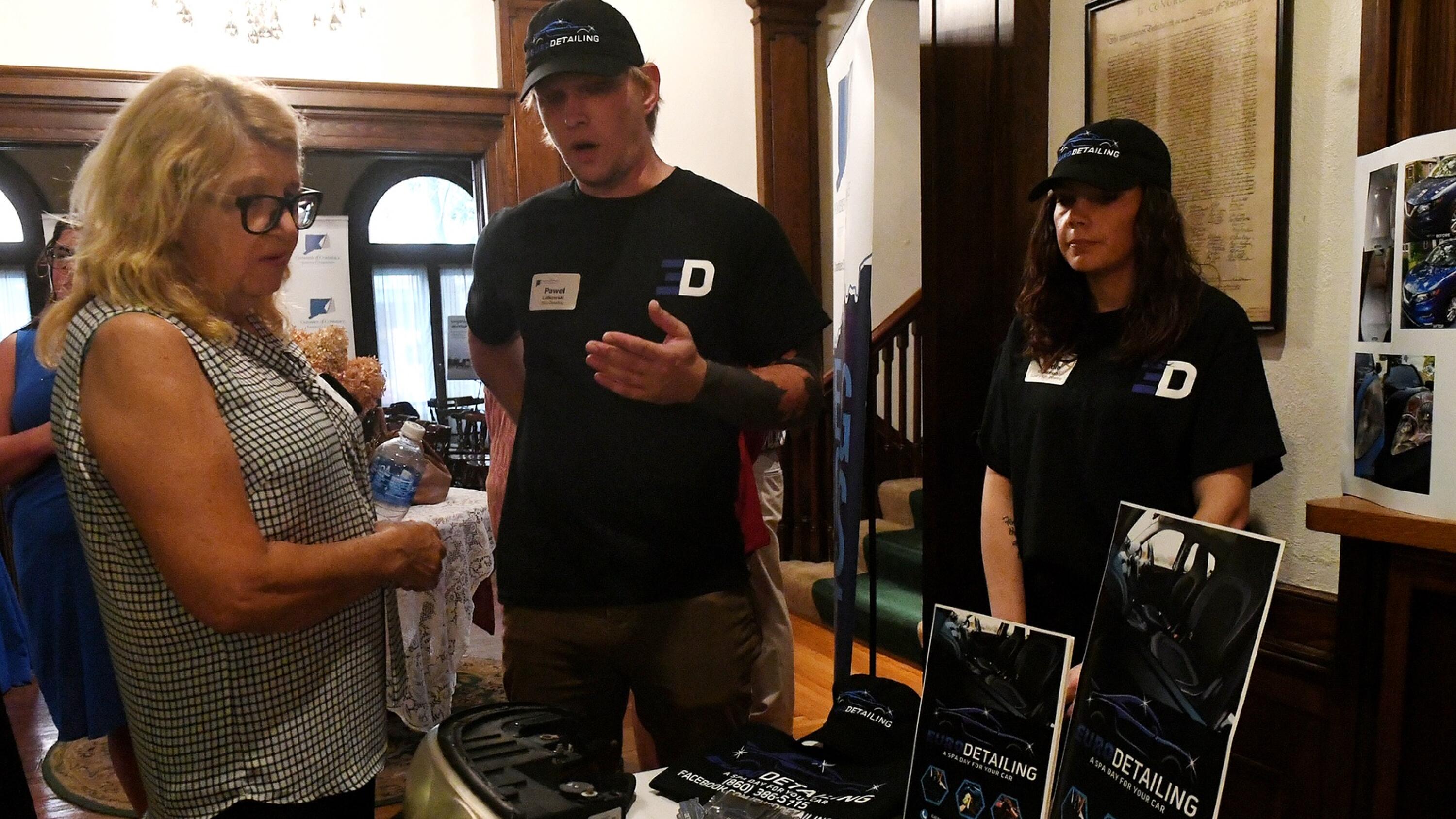 Gary St. Vil, of Norwich, center, talks to Wendy Vincent, left, of Women’s Business Development Council, and her son, Harrison, Friday, Sept. 9, 2022, about his idea for Bon Vivant, a fine dining experience, during a “Demo Day” event hosted by the Chamber of Commerce of Eastern Connecticut at the Thames Club in New London. St. Vil shared a display table with Angela Angulo, not shown, of New London, was pitching her idea of ​​Socially Acceptid, a social media strategist/content creator. People developing their ideas for a business participated in a free 10-week Entrepreneur Academy held by the chamber over the summer. (Dana Jensen/The Day) Buy Photo Reprints

New London Gary St. Vil is an engineer who entered the Entrepreneur Academy with the idea of ​​starting a group home but finished with a plan for a chef’s table in which one chef and one sommelier serve 16 people in one seating per night.

The Ledyard resident said while this “seems like a pivot,” it’s really about following another passion, and realizing through mentoring that an idea he didn’t think was viable could be.

“They’ve already poured more into me than I can ever imagine,” St. Vil said of the Chamber of Commerce of Eastern Connecticut and its partners in the Entrepreneur Academy. He said the course was like “drinking from a fire hose,” but he’s going back and reviewing information from each class.

The chamber earlier this summer launched the 8-week Entrepreneur Academy, a program that met weekly at no cost to participants, who range from aspiring business owners like St. Vil to people who own established businesses, such as Lashes by Lee and Progression Training.

On Friday night, the chamber held a crowded trade show-style “Demo Day” at the Thames Club, in which about 15 participants showcased their businesses and plans to other businesspeople, potential investors and community members.

Attendees could vote on their favorite venture, and the top three received cash prizes.

Christine Kulos said she and her husband, Tim, started “all over the place” but ended up with T&C Recycling & Cleanouts, a junk and debris removal business, and the Norwich couple plans on registering the business soon. Christine is a social worker with Safe Futures while Tim is a self-employed handyman and “jack of all trades” who already does scrap metal recycling on the side.

On the other end of the spectrum is Tai Au, who already co-owns three businesses: Pink Basil and Samurai Noodle Bar in Mystic, and Spice Club in Niantic. But she is planning to launch a new business next year, one that provides 100% plant-based meal kits.

Au said she joined the Entrepreneur Academy because she likes to improve her knowledge and learn, and she wanted more information on who to contact if she needed more investment.

Demetria Young of Groton launched Buttacup’s, selling herbal teas and natural products, at the height of the pandemic, starting off making elderberry gummies to boost the immune system of her daughter.

The Demo Day drew other business owners, such as Felicia Stevens, who earlier this year closed The Drunken Palette art studio next door after 12 years in business the pandemic dealt her blow after blow but opened Green Ribbon Counseling last month.

“We should always support local businesses and entrepreneurs,” Stevens said. She gave budding entrepreneurs advice from her experience, and noted that public speaking is one thing people can work on.

Lavoie noted that new business starts have increased 400% since the pandemic, as people have focused more on what they’re passionate about, and that his team is working with CTNext to help entrepreneurs get from “napkin to commercialization.” Whitescarver said seCter is participating in the Connecticut Small Business Boost Fund of low-interest loans and is kicking off a grant program soon for entrepreneurs.

Major Michael Passero also welcomed the participants. Chamber President Tony Sheridan said Friday the pilot program had about 42 original sign-ups and about 17 people stuck it out for the eight weeks.

Sheridan said earlier this summer the goal of the program is to prevent businesses from failing, and the idea going forward is to have the Entrepreneur Academy continue running at the Thames River Innovation Center, the chamber’s future home in New London.

The coordinator of the Entrepreneur Academy was Rosemary Ostfeld, a Wesleyan University professor and founder of the startup Healthy PlanEat.

The group met weekly at the Public Library of New London, with each session featuring a presentation on topics such as identifying a target market, access to capital, and pitching an idea and a discussion with a local business owner.

The educators included people from the regional chapter of SCORE, Connecticut Women’s Business Development Council and CTNext, while people from Ivy’s Simply Homemade, Flock Theater and Waterford Hotel Group were among those sharing their experiences.